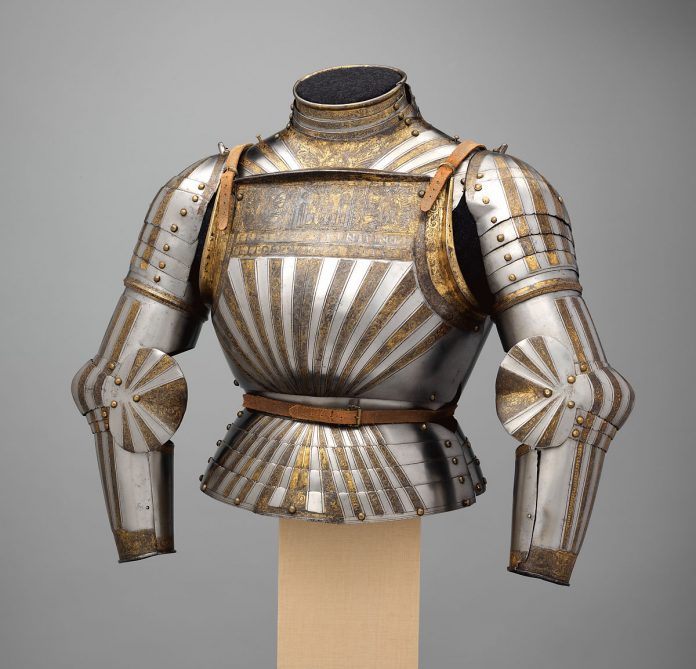 Plate armor remains the cement of an archetypical knight’s image. Whenever you see, hear or talk about knights, the mental icon of a fully armored horse rider immediately comes inside and lives in your head rent free. Video games, movies, books and TV series that depict knights can’t seem to avoid dressing them in plate armor, though there are some exceptions, such as the main casts in Monty Python’s The Holy Grail.

So what interesting facts can you learn from Europe’s historic, iconic armor? 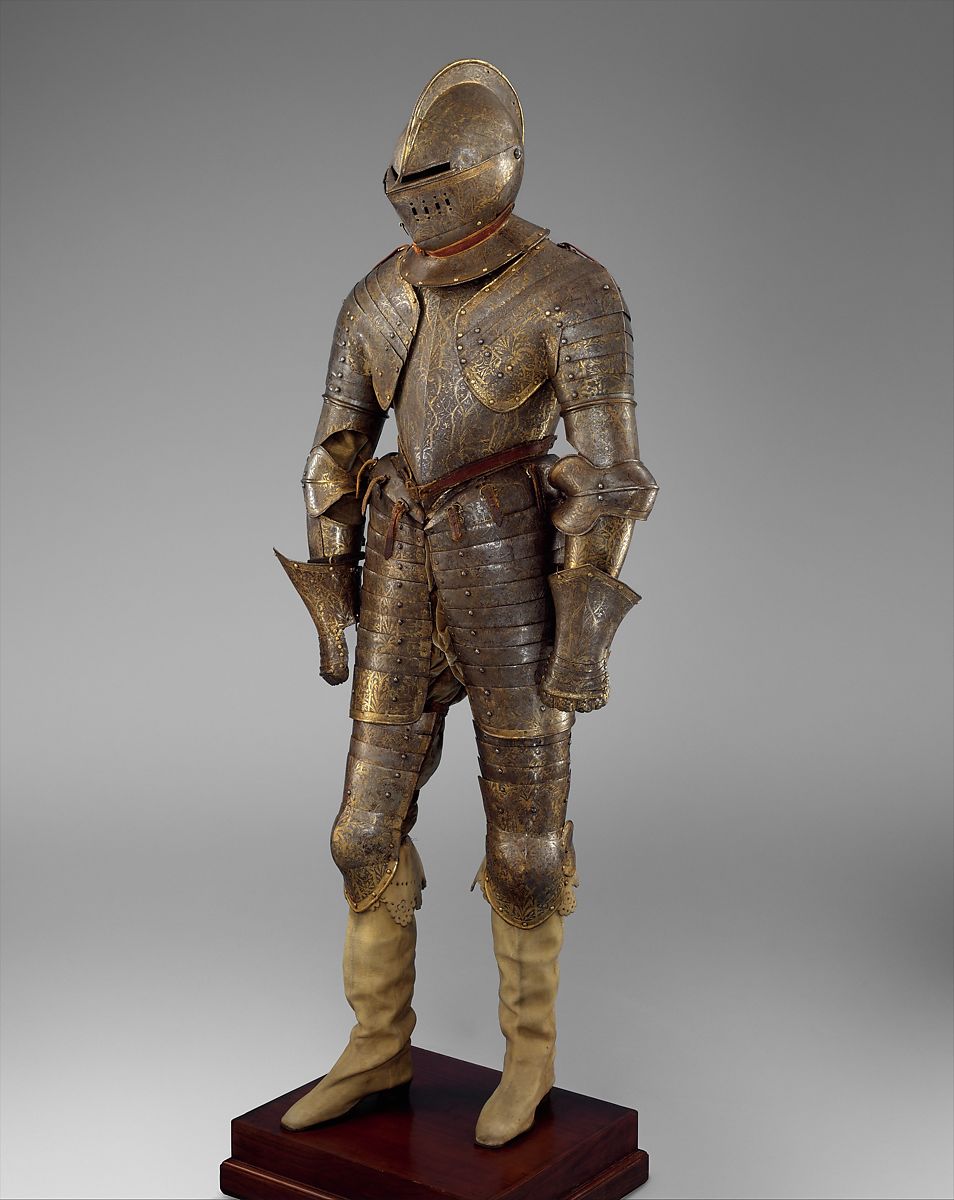 The full suit of plate armor didn’t come into existence until around the first half of the 15th century, specifically by 1420-30. Prior to this timeline, way back in the ancient Greek and Roman times, soldiers did wear partial plate armor, such as a Spartan’s bronze cuirass and a Roman’s lorica segmentata, a cuirass consisting of banded metal strips. Due to its expensive production cost, these fell out of favor after the Roman Empire’s collapse.

Chainmail, first appeared in the 3rd century, became a mainstay throughout the Dark and Middle Ages. It is a suit made of interlocking rings connected closely to each other and form a garment, like a hauberk and coif for the body and head respectively. By the late 13th century, single pieces of metal were added to protect vulnerable areas including the joints and shins. Eventually, they became larger and more numerous until they were able to cover from head to toe.

Even with full plate armor, chainmail was still sometimes worn underneath them. They may also be sewn onto arming doublets or gambesons.

One first look at a full suit of armor and you may think that the protection comes at a cost: weight. How can a man still move around normally under a tin can with legs?

The answer to this is that its weight is so evenly distributed all over the body that running and jumping in it is still possible. An average armor only weighs up to 25 kg, and this is for the “everyday”, battle armor worn in wars. Plus, you must remember that a knight was trained to fight ever since he was a child page, and agility exercises were part of the lessons.

“Heavy” armors were only applied to tournament variants, in which the thickness and weird visors allowed maximum physical protection in exchange for reduced visibility and agility. These were not meant to be worn in actual battle. 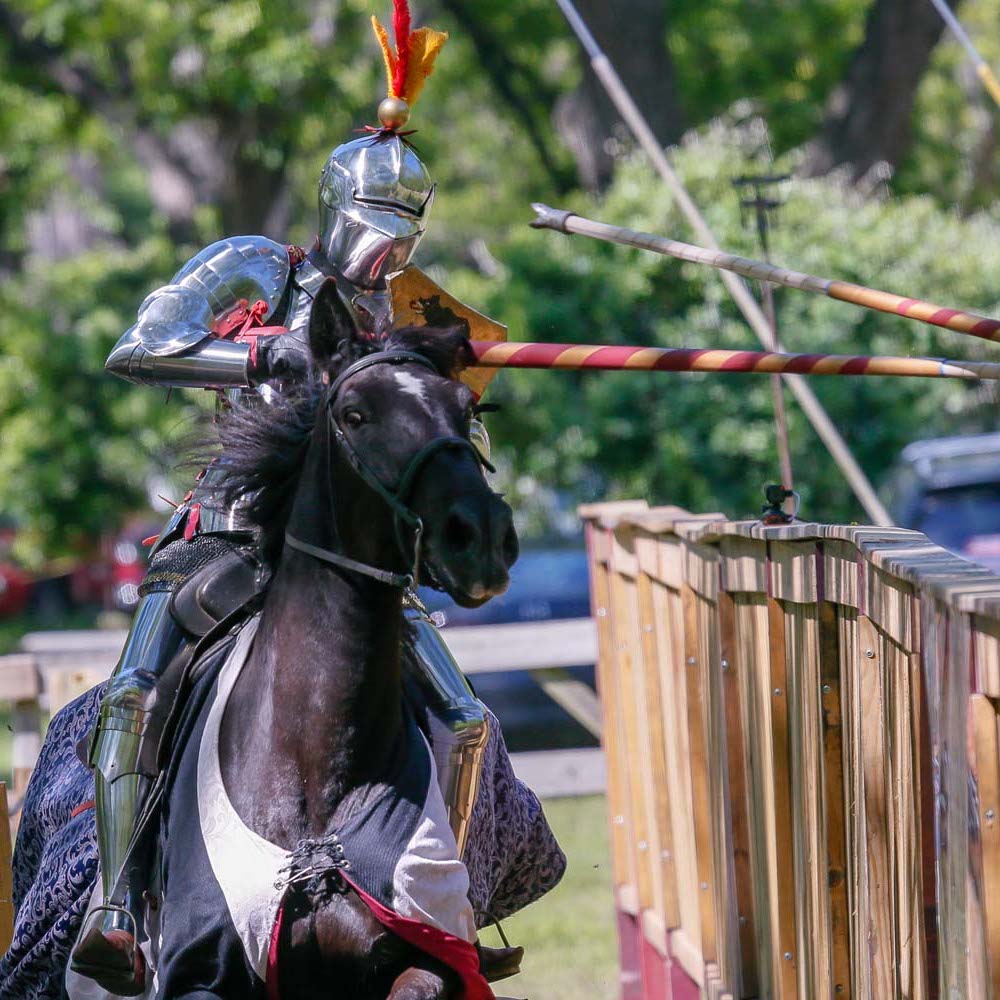 While full plate armor is often associated with knights, they weren’t the only people to wear them. Soldiers, mercenaries, and the lower nobility also wear pieces of plate armor. Furthermore, not all men-at-arms were knights. They could be another nobleman, a cavalryman soldier that could afford the armor, or a mercenary.

Armor also wasn’t always expensive as they can be bought in markets, urban shops and trading fairs, though the prices may reflect their quality.

Yes, it is virtually protective against swords unless the blades find a way into its gaps. That was why a sword, though can be highly prized, weren’t the main weapons of war. Even when padding was normally worn underneath it, maces can still crush armor with their blunt, solid heads, delivering blunt trauma and broken bones. Polearms were also sufficient to penetrate armor or exploit its weak points, the latter which long tapered swords could do by design. Bolts and arrows remained an issue.

Armor could also be protective against early, low velocity firearms unless fired from close range. As firearms were evolving, not even a full plate was sufficient in stopping the penetration of a ball. 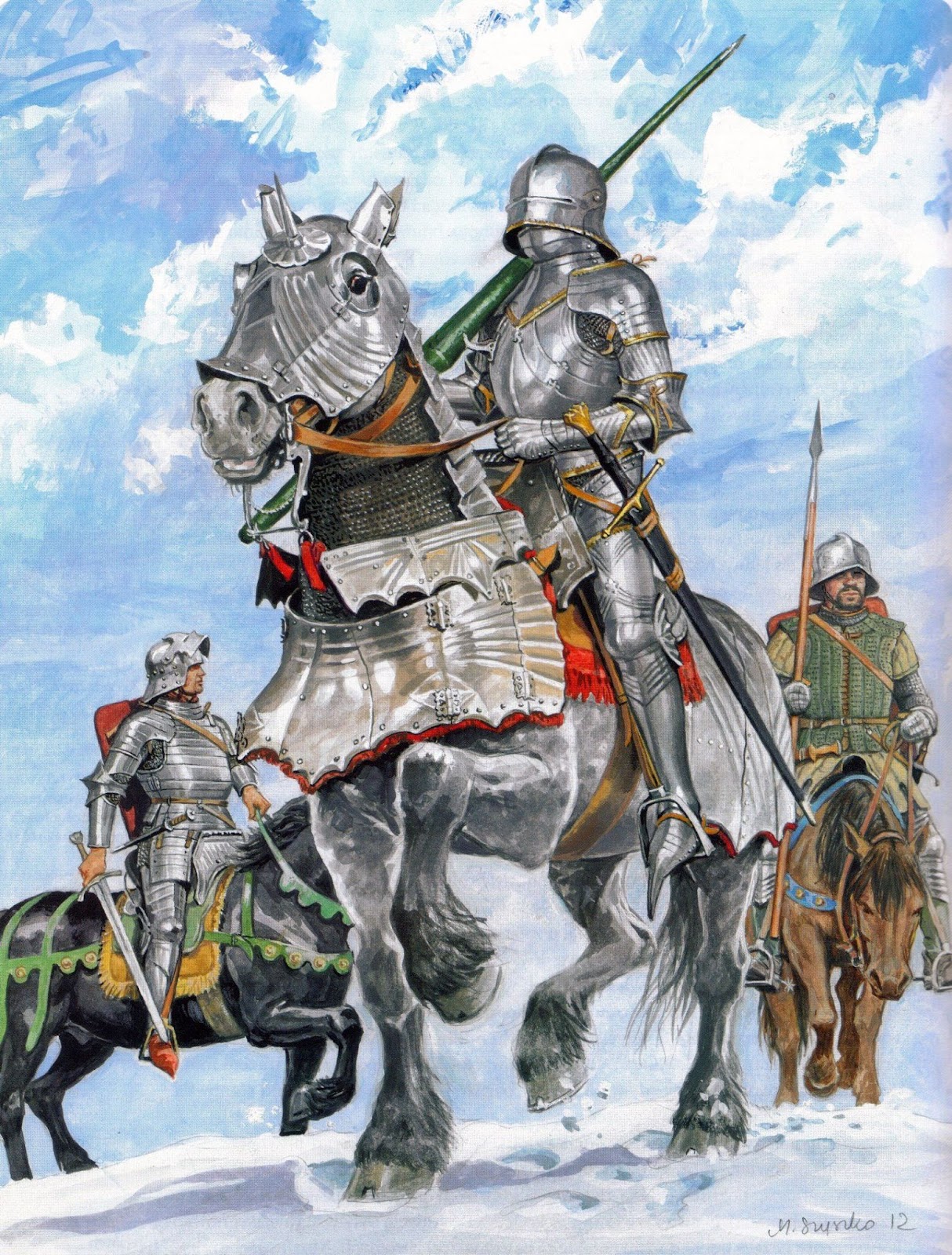 Armor is commonly worn with padding.

You do not just wear plate armor onto your undergarments or clothes. It doesn’t work that way. First, as mentioned before, maces and polearms still hurt, so you need padding to cushion your body in order to absorb the impact. Chainmail weren’t always worn since they may be expensive due to the labor intensive process of making it.

Second, some pieces of armor have holes to be laced through. Arming points are essentially laces on a gambeson or arming doublet that did the job of binding the pieces onto you. Without either of these garments, it is impossible to wear some of the pieces that require lacing, including pauldrons (shoulder armor) and the cuisse (upper thigh armor). In the latter’s case, it will hang loosely on your legs rather than sitting on it. 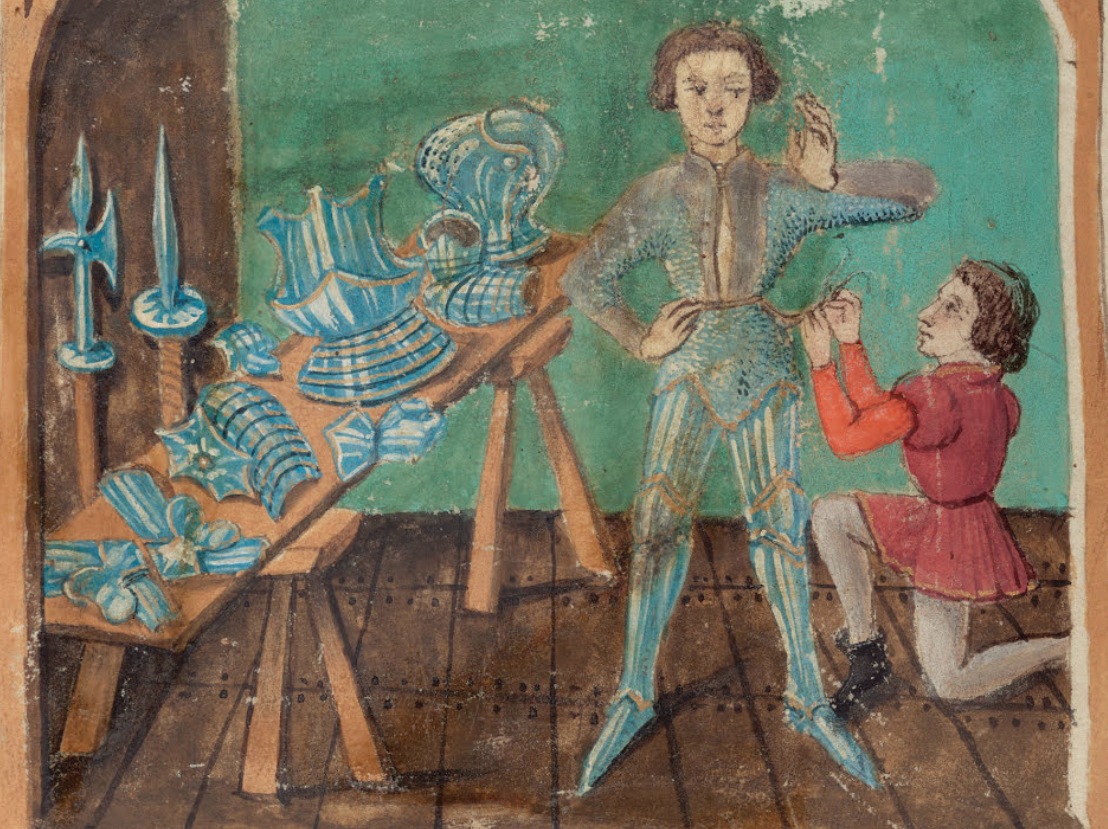 In tournaments, sets of tournament armors can be exchanged with different types of the same pieces to fit different purposes such as jousting and melee. Garnitures for the nobility are adorned with beautiful, matching patterns and color schemes, this is common for a type of plate armor called Greenwich armors. 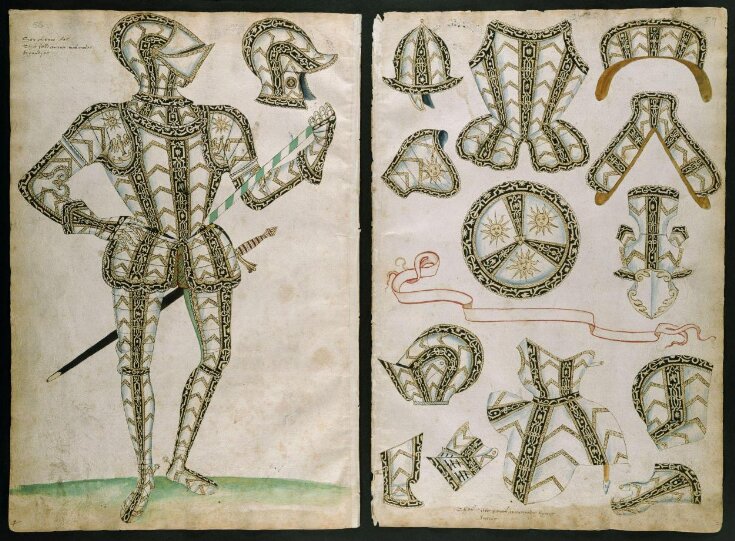 The appearance of firearms didn’t immediately render body armors obsolete until the 1800s. Rather, its parts were gradually reduced, starting from the legs. In the 1600s, three quarter munitions armor were mass produced and worn by foot soldiers and cuirassiers, covering the upper thighs, body, arms and head.

By the start of the 1700s, full plate armor was only worn by those of high rank. While it was earlier worn to safely survey the battlefield without getting hurt by musket fire, the armor was eventually more seen as a sign of rank. It was still fashionable to portrait monarchs in body armor, but even this style became obsolete.

In World War I, some soldiers experimented with metal, ballistic body armors, such as the German armor, Sappenpanzer, and America’s Brewster Body Shield, an armor that covers from head to the waist. Although effective, none of the Brewsters were widely produced.