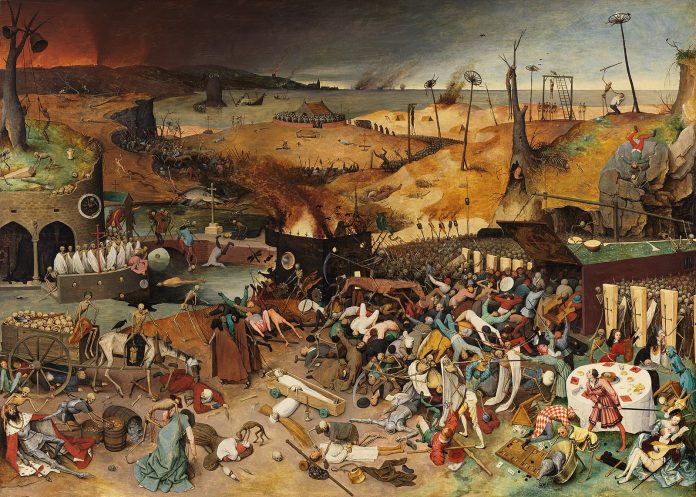 The COVID-19 pandemic is far from the first outbreak of a life-threatening virus to have ever ravaged our planet in its long history. Before COVID, there were countless other plagues that stole the lives of millions. These outbreaks widely ranged in terms of documentation as they happened centuries ago and ye olde historians back then were not as thorough as there are now. One of the most well-documented, most devastating and most widely known cases of plague is called The Black Death.

The Black Death is the first ever major pandemic to ravage Europe, beginning in the year 1346 and lasting until 1353. It is also the most fatal pandemic in human history, with a death toll of over 200 million people. Horrifically, most historians believe that the actual amount of human lives lost is much higher than that. What’s certain is that The Black Death wiped out more than half of the European population as a whole.

Back in the 1300s, doctors and other medical professionals had no idea what caused this plague from occurring, much less how to go about healing the infected. Now, we know that this plague was caused by a bacterium called yersinia pestis. The yersinia pestis bacterium can be found on fleas, usually on rodents such as rats. It is widely believed that The Black Death was brought to Europe by the rats on ships returning from Crimea and Asia.

As the middle ages was not known as a period of time with exemplary hygiene, the flea-infested rats thrived in Europe. They scattered to find food and water sources in barns, mills and homes. This led to the first humans contracting the plague in Europe. Eventually, the plague was then transmitted through human contact. Any exchange of fluids with an infected person led to the quick spread of the sickness. As the humans were unaware that the plague was passed on through touch, The Black Death spread like wildfire.

Yersinia pestis can manifest in three different forms of plagues.

Bubonic Plague: The most notable symptom is the appearance of buboes, painfully swollen lymph nodes usually in the groin, neck or armpits. These large buboes can swell to the size of apples and often ooze with pus and blood. It also manifests in extremely high fever, rashes, painful joints, vomiting blood and headaches. Gangrene can also set in, changing the infected flesh to black as the skin dies. Left untreated, 80% of the diseased will ultimately die within 2 to 7 days.

Pneumonic Plague: This form of the plague targets the respiratory system. It occurs when a victim inhales the yersinia pestis particles which infects the lungs. It also causes fever, headache and weakness. The rapidly developing pneumonia turns into shortness of breath, chest pain, cough and sometimes bloody or watery sputum. Left untreated, 90% to 95% of the diseased will perish.

Septicemic Plague: Even though this is the least common form of plague, septicemic plague has a mortality rate of close to 100% and develops so quickly that there is no time for treatment. The symptoms include high fever, chills, extreme weakness, abdominal pain, shock and possible bleeding into the skin and other organs. The infected also develop purple patches on their skin.

These plagues still exist to this day. You can contract these horrible illnesses if you travel to certain parts of the world. However, they can now be treated with antibiotics. Remember to always be grateful for our advanced technology. However, we must also be prepared for the future and invest in family medical insurance policy malaysia. We can never know what will happen in the future, after all.

Due to this plague, people were dropping like flies. It was said that the living spent all of their time burying the dead. Eventually, so many people died that there wasn’t anyone left to bury the bodies. They were piled up in mass graves, buildings and even on the streets and left to rot.

This immense depopulation wreaked havoc on the systems in Europe. There was an intense demand for labor as there weren’t enough people, particularly for land workers. As expected, the plague mostly wiped out peasants and the working class as they lived in closer proximity to each other and weren’t privileged enough to bother about hygiene. This left the land-owning aristocracy bereft of workers to plow their lands and they were forced to settle for better terms with those left alive, providing them with better wages and conditions. This closed the vast gap between the European wealthy and poor. Eventually, the rise in people living for humanist pursuits kickstarted the Renaissance in Florence.

People living in the Middle Ages experienced a spiritual upheaval in the wake of The Black Death. Believers in various faiths either doubled down to find further refuge and safety in their beliefs or abandoned religion entirely. Fanatics and extremists experiencing a resurgence in their faith targeted different groups of people, blaming them for the plague. They believed that The Black Death occurred because God was angry at these so-called heretics and wanted to punish everyone. These religious fanatics also believed that the plague can be lifted by winning God’s forgiveness through attacking the ones thought to be responsible. The targeted groups included jews, pilgrims, foreigners and the Romani people.

Economically, severe inflation occurred due to The Black Death. Since procuring and producing goods became dangerous as there was a risk of contracting the disease, the prices of every item, both produced locally and imported, skyrocketed. This caused a huge slump in trade that quickly followed the rising death toll. It took almost two centuries for the population levels of Europe to recover from this event.

In a more positive light, the various wars raging in Europe were also put on hold as an effect of the plague. Additionally, people who were lucky enough to survive the disease outbreak ended up living much healthier, better, fuller lives. The peasants in particular received more resources as there were so few people left alive and as a result, they had better diets. In the wake of The Black Death, there was more food, more land and more money to go around. As the saying goes, it’s always darkest before the dawn.

The Black Death is largely regarded as one of the most devastating events in human history. It had a massive impact on Europe and the world as a whole. We must always be eternally grateful for the advancements that have been made in technology, medicine and knowledge. However, as we recently saw with COVID-19, nothing can stop an outbreak of disease from ravaging the Earth.